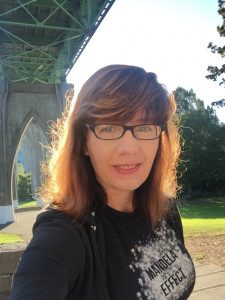 Me, standing under the St. John’s Bridge in my neighborhood in Portland, Oregon. The bridge is the site of weddings, festivals, film shoots, and deaths.

How to Save a Million Lives

It starts with being visible.

I remember standing in my aunt and uncle’s sunny family room in San Mateo, California on April 18, 2018. That was when the customer service rep on the phone told me I did not qualify for life insurance. This was a problem. In fact, it was a huge problem. It meant I would not be able to obtain what is called “Key Man” Insurance, which shields professional investors in case of the accidental or untimely death of the CEO or other essential team members. Key Man Insurance is a must for any startup seeking serious investor funding (seed round or VC). Unknowingly, I had raised funds from friends and family for a venture that could not succeed with me at the helm.

I checked it out. I got a second quote. It didn’t matter that I was healthy and had managed the condition successfully for 19 years.

This wasn’t a case of bias, or stigma. It was a numbers game. The diagnosis is bipolar disorder. The reason I couldn’t get life insurance was that my diagnosis carries a 15 – 20% lifetime fatality rate. That means that as many as one in five people with bipolar disorder may die by suicide. (National Institute of Mental Health, as cited by DBSA.)

If present trends continue, over 855,000 of the 5.7 million individuals living today with bipolar disorder in the U.S will die by suicide. That’s almost a million people.

We are living in the middle of an epidemic. And one ever seems to notice.

Which brings me to the other date. Just over a year ago.

On that single day, in my home city of Portland, Oregon, we lost three people to suicide. One of the deaths happened a few hundred feet from my apartment, when a woman jumped off the St. John’s Bridge. I found out when I heard the sirens and saw the flashing red lights. I took some roses out of a vase, went outside, walked down the hill, and put the roses by the police line.

For me, that death brought home the reality of the suicide epidemic in America. I don’t know whether any of the three people who died had a diagnosis, but given the high risk factor and the fact that 1 in 23 Americans are bipolar, it is likely. Suicide fatality rates are actually higher for people with bipolar disorder than for those with unipolar depression(NCBI). Because suicide is a social epidemic, the death of one individual can result in the deaths of other individuals, who may not even share the same diagnosis. There a lot of reasons why this post has been hard for me to write. One of them is that this year, in the time since I started writing this blog post, about three weeks ago, I learned of two other likely suicides in my home communities: one here in Oregon and one in Massachusetts. The taboo around speaking about suicide is strong, just like the taboo against discussing bipolar disorder. I went to a walk this month by the American Society for Suicide Prevention. It’s a worthy event, and it does a lot of good for survivors. But nowhere — nowhere — was bipolar disorder mentioned as a cause or a killer. Talking about America’s suicide epidemic without talking about bipolar is like trying to talk about heart disease and never mentioning high blood pressure.

Last fall it felt like the bodies were literally dropping from overhead. Those deaths, in particular the one so close to home, jolted me out of complacency. I kept thinking to myself, “If fifteen percent of bipolar people are dying by suicide, why don’t we hear about it? Why aren’t we doing more to stop it?”

I had been marked as a plague victim and I didn’t even know it.

I found a replacement CEO for my startup. After stepping down, my plan had been to take a course or two in data science and rejoin the corporate world. Instead, I found myself on an entirely different path. I earned a certification in Life Coaching, another as a Peer Support Specialist, and completed the excellent QPR suicide prevention training which is offered for free to lay people in the Portland area. The goal: work part time coaching bipolar and entrepreneurial clients from around the world. Spend the rest of my time building something cool.

The crazy thing is, one year later it actually seems to have worked.

The people I have coached confound my expectations. They are C-level executives, computer programmers, bankers, and accountants. Leave every expectation you have surrounding bipolar people and their temperament or personality type at the door. Just know, above all, we are here. And there are a lot of us. The recovery rate for bipolar disorder is 80%. (Health Central) Mostly you can’t tell us apart from anybody else. Because when the medication works well for us, like most other Americans, we’d much rather concentrate on our lives and families and hobbies than on getting riled up with anything that resembles activism.

Coaching is intense. I have had more than one occasion where the client burst into tears during the first session. Unlike therapy, the emphasis is on achieving short term goals. Most of my service offerings are designed to last 3-6 sessions, although some clients stay on much longer. I think my favorite sessions are the outdoor fitness sessions, where we do the coaching during an hourlong walk or hike. I never agree to work with a client unless they are also seeing a licensed doctor or clinician. Confidentiality is key. In the event of a situation where someone’s safety is at risk or where someone expresses suicidal thoughts, I will of course contact emergency services, as well as other members of a client’s care team.

Whatever assorted coaching gurus may promise, my type of coaching won’t make you rich. That’s not why I do it. I just know that it’s important for bipolar people to be visible.

This is where the saving lives come in. It’s about much more than the coaching, although I believe that’s important and meaningful work. It’s about being visible, and letting people know that bipolar gets better. Coming out is risky, and it has a cost. You may not get asked on that second date. As a programmer the last thing you want is your supervisor wondering what medications you were taking when you pushed that last commit! But I’ve come to believe that the cost of silence is greater. Silence equals death. Stigma equals death.

Here’s how we can save one million lives over the next generation:

1.) Make stigma against bipolar people unacceptable. End the jokes. Stop using bipolar as shorthand for a personality disorder. Educate yourselves. This shouldn’t be my job, as the person with the disability, but I need to take responsibility first and foremost for my own actions. I am not “out” in every professional or social social situation, but I try to live my life in a way that I can communicate to others, who may be more closeted, that there is hope.

2.) Improve quality and access to mental health care. Bipolar people face special challenges. We encounter more stigma than people with depression or anxiety disorders, and if we are misdiagnosed, the consequences can be serious. But all mental health conditions deserve treatment on a par with physical health. The quality of generic medications has taken an alarming dive. I have experienced these issues myself, and heard alarming reports from others. Legal or regulatory action must be taken to ensure that vulnerable populations do not suffer.

3.) Work for a cure. Amazingly, for a disease that affects millions of Americans and people the world over, we still do not understand the causes of bipolar disorder. It receives only a fraction of the federal funding for diseases with a similar mortality rate. Meanwhile, the pharmaceutical industry shows off its latest advances: a pill with a tracking device to make sure the patient complies and takes their medication. We are solving for the wrong goal here.

The reason is that bipolar people are our best and our brightest. We are leaders. We are artists. We are entrepreneurs and innovators. We are mystics. We are heroes. We feel deeply, and we act on the courage of our convictions. From Winston Churchill to Kanye West, the names of famous bipolar people read like a roll call. Bipolar people who are able to live out their lives to their fullest potential will design lifesaving vaccines, help mitigate climate change, and create songs and stories that sustain and offer hope for an imperiled planet. We give back every day. We are mothers and fathers, aunts and uncles, teachers and mentors, some of the best and most loyal friends you will ever find. We are generous. We go the extra mile. Maybe we are still trying to prove we are “good enough.” Maybe deep down we know that we different, and also blessed. There is a reason we are in this genome.

We have so much to give, and we are irreplaceable.

Find free crisis resources in the Pacific Northwest and nationwide.

Learn more about my bipolar coaching practice at www.bipolarlifecoaching.com.

Read my advice posts on Quora.

Listen to a radio spot:

PDX Local is advertising-free and offers coaching services to community members on a sliding scale basis. Donate to support this work.